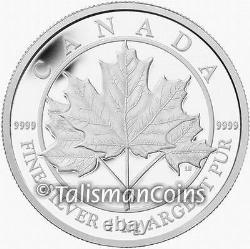 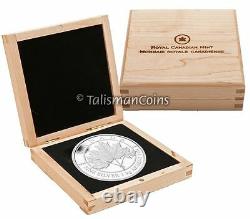 The MOTHER of all Silver Maples - get this huge (4 diameter) and rare (mintage 1,200) pure silver kilogram proof while we still have them! We're willing to bet that this is the one of the most unique One Kilogram. Coins you've ever seen! Minted by the Royal Canadian Mint in pure silver.

With a face value of 250 dollars, this huge and intricately engraved masterwork is only the second Kilogram-Sized Silver Maple - ever! An unique, one-year-only design of Canada's national symbol is highlighted on the huge tableau in full, frosted cameo proof finish- at more than 100 mm in diameter. It is a full 4 inches across! Even better is the investment potential - the total worldwide mintage of 1,200 (twelve hundred) for this Maple Leaf Forever. This year the three-leaf maple sprig design was created by artist and engraver Luc Normandin, and depicts the leaves of the large and robust sugar maple.

Famous the world over for its syrup! The Maple Leaf Forever - Symbol of a Nation's Spirit.

From backpackers in Berlin to peacekeepers in Pakistan, Canadians are immediately identifiable by a singular image they faithfully sport on pins, badges, and appliqués: the maple leaf. This botanical symbol has represented Canada and Canadians for nearly three hundred years. Historians generally recognize the adoption of the maple leaf by Quebecs Société Saint-Jean-Baptiste in Montreal in 1836 as the first official use of the symbol to represent an element of Canadian culture. The symbol was soon popularized in print, song, and in the small emblems (such as lapel pins) with which Canadian residents of various origins honored their homelands.

The English had their roses, the Scots their thistle, the Irish their shamrocks, and the French their fleur-de-lis - but native-born Canadians quickly chose the sturdy yet ornate maple leaf. The idea of including the maple leaf on Canadas national flag took root with Lester B. Pearson in World War I. When he noted that every Canadian battalion had included some form of the maple leaf in its insignia. Fifty years later, in 1965, under his leadership as prime minister, Canadas famous red-and-white maple leaf flag.

In addition to the maple leafs presence on various provincial flags and coats of arms, the countrys coinage has featured maple leaves, wreaths, and boughs in various forms for most of Canadas history. In fact, the maple leaf was present on all Canadian coins from 1876 to 1901. Since that time, it has always appeared on Canadian pennies, and numerous other Canadian numismatic coins.

If you're considering this Proof Silver Kilo. As an investment, it's kind of hard to go wrong here. All Silver Maple Leaf collectors need this coin! Tremendous size - 1000 grams (1 kilogram)! Savvy collectors can ever own this monstrous beauty! The meticulous detailing and incredible design one expects from the artistic engravers at the Royal Canadian Mint! Silver Maple in 1 Kilo size. And the design is the. All previous Canadian 1 Kilogram Silver Proofs. Have disappeared quickly and are now difficult to locate!

From a numismatic point of view - this ultra-rarity will be the centerpiece of your collection! The Royal Canadian Mint refines the purest silver in the world. The RCM is also the only mint in the world to issue commemorative coins in a. This one kilogram silver proof.

A one-year-only, three-leaf sugar maple. The legend 9999 1 KG FINE SILVER guarantees the weight and purity. Her Majesty, Queen Elizabeth II of England. This portrait, the fourth effigy of the queen to appear on Canadian coinage, was executed by the artist Susanna Blunt. The date, denomination and legend ELIZABETH II D. REGINA ("Elizabeth II, Queen by the Grace of God") also appear. The coin is encapsulated and presented inside a solid maple wood casket or coffer, lined with black velvet and protected by a black outer sleeve. An individually-numbered certificate of authenticity is included. 101.60 mm (4 inches). The item "Canada 2012 Maple Leaf Forever Sugar Maple $250 1 Kilogram Kilo Silver Proof" is in sale since Tuesday, April 10, 2012. This item is in the category "Coins & Paper Money\Coins\ Canada\Commemorative". The seller is "talismancoins" and is located in Saint Louis, Missouri. This item can be shipped worldwide.