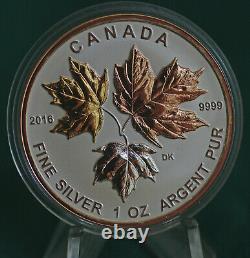 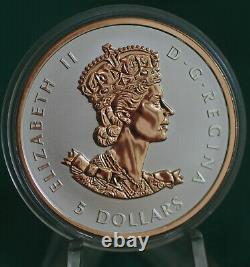 2016 Silver maple leaf coin from fractional set. Historic Reign of Queen Elizabeth II. 99.99% Silver two leaves have gold plating!!! This coin is 38 mm in diameter and weighs 31.39 grams = 1 oz. It is in perfect condition and is minted to the standard of 99.99% purity!!

The reverse has a three maple leaf design with selective gold plating--the largest leaf has pink gold plating and the left leaf has yellow gold plating. The rim is also pink gold plated. Additionally there is edge lettering on the one - ounce coin that reads. LONGEST REIGNING SOVEREIGN / SOUVERAIN AU PLUS LONG RÈGNE' The obverse has the gold plated brilliant relief image of the Queen (by Susanna Blunt) against a satin background. The coin is minted in a beautiful reverse proof finish which means that the maple leaf, the queen's effigy, etc.

Are all in brilliant relief against a frosted or proof background. Your coin will be sent to you in its original capsule.

No certificate is included because the coin is taken from a set. On September 9, 2015, the reign of Her Majesty Queen Elizabeth II surpasses that of Queen Victoria (63 years 7 months and 3 days) to become the longest reigning Sovereign in modern Canadian history (only exceeded in our history by the reign of His Majesty King Louis XIV). Her Majesty Queen Elizabeth II, Queen of Canada, has served as a constant symbol of duty, service, continuity and affection for Canada and all Canadians. This set of beautifully engraved silver coins in one-ounce and fractional denominations brings together two images that evoke Canada's pride, strength and rich history in a fitting tribute to Her Majesty's historic reign, which reflects so much of this country's accomplishments as a modern, dynamic and proud country. Recreating the leaf's appearance in a natural setting, three different sizes of maple leaves are joined at the stem and gently splay out to fill the entirety of the reverse.

Each leaf's distinctively serrated edge and deep veins are given a life-like quality by meticulous engraving, which shines brilliantly thanks to the reverse proof finish against the frosted background. There is pink gold plating on the largest of the three maple leaves, on the Queen's effigy and on the rim. The obverse pays tribute to the historic reign of Her Majesty Queen Elizabeth II with a recreation of the 1952 effigy of Her Majesty wearing the Imperial State Crown (worn at her Coronation).

The coins are presented in a clamshell case with a custom outer box showing an image of Her Majesty on her Coronation day, wearing the Imperial State Crown shown on each of the coins. Only 7500 of these coins (in sets) were minted. Lending historical context to this celebration of Her Majesty's reign is the 1952 effigy of Her Majesty Queen Elizabeth II wearing the Imperial State Crown on the obverse. Yellow and pink gold plating on the one-ounce coin add a beautiful contrast to the silver while enhancing the precision engraving.

The other coins have pink gold plating on both the reverse and the obverse. The reverse proof finish gives the leaves a beautiful, natural shine against the frosted background.

A valuable addition to any nature-, Canadiana-, fractional- or monarch-themed collection. PHOTOS: Note that the photos I post in my listings are all from my own inventory. However, for items like this one where the products are brand new from the mint and are identical the photo posted in the listing is a STOCK photo meaning that the photos represent the item you will be getting.

Photos are taken in natural light so sometimes there's a slightly WARMER reddish or brownish tone to the photos..... This is just because they're taken in front of a large window in order to represent them to you as honestly as possible. Normally there is almost no difference between the photo you see in the listing and the actual product you are sent. Certificate numbers (if shown in a photo) are an example of something that will not be the same in the item you receive. Member of Royal Canadian Numismatic Association. Be sure to add me to your. GST or HST EXEMPT item.

Usually MUCH cheaper for multiples of this item or similar weight/size.. your item is being sent by a cheaper and slower but fully trackable method (3-4 weeks typically).

I have no control over how long the postal systems take to get it to you. Add a map to your own listings.

This item is in the category "Coins & Paper Money\Coins: Canada\Commemorative". The seller is "vbref63" and is located in this country: CA. This item can be shipped worldwide.