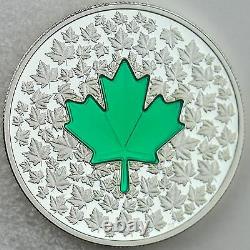 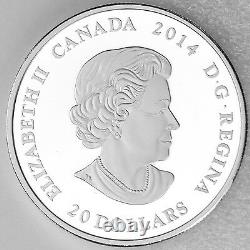 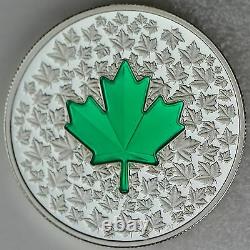 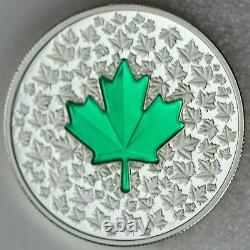 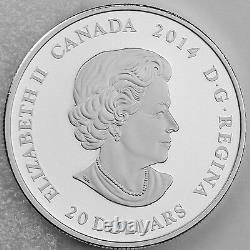 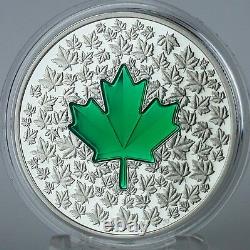 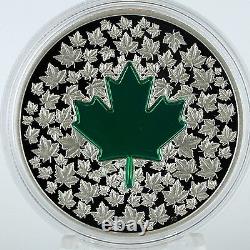 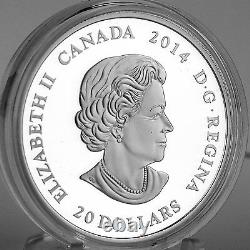 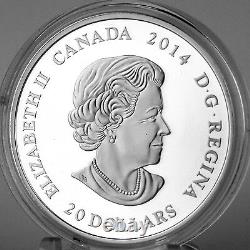 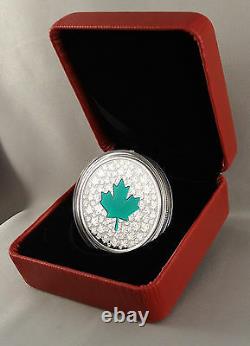 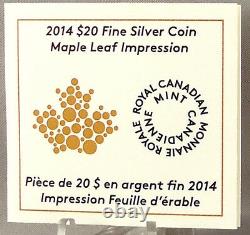 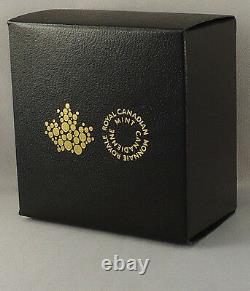 All coins offered in this listing are unsearched! All of our Canadian coins are acquired directly from the Royal Canadian Mint - The counterfeiting of numismatic coins, and the sale of stolen coins, are serious problems for coin collectors and dealers. Unlike many other coin dealers.

To protect against these risks, we do not sell'second-hand' coins. All of our Canadian coins are stored in a climate controlled, smoke-free vault. Maximum Mintage - 7,500. Composition - 99.99% pure silver. Weight (g) - 31.39 (one troy ounce). Certificate - serialized (serial numbers will vary). Face value - 20 dollars (a legal tender Canadian coin). Artists - José Osio (reverse), Susanna Blunt (obverse). From backpackers in Berlin to peacekeepers in Pakistan, Canadians are immediately identifiable by a singular image they faithfully sport on pins, badges, and appliqués: the red maple leaf.

This lyrical cipher has symbolized Canada and Canadians for nearly two hundred years. Historians generally recognize the adoption of the maple leaf by Quebec's Société Saint-Jean-Baptiste in Montreal in 1836 as the first official use of the symbol to represent an element of Canadian culture. The symbol was soon popularized in print, song, and in the small markers - such as lapel pins - with which Canadian residents of various origins honored their homelands. The English had their roses, the Scots their thistle, the Irish their shamrocks, and the French their fleur-de-lis - and native-born Canadians quickly chose the prosaic maple leaf. The idea of including the maple leaf on Canada's national flag took root with Lester B.

Pearson in World War I, when he noted that every Canadian battalion had included some form of the maple leaf in its insignia. Fifty years later, in 1965, under his leadership as prime minister, Canada's famous red-and-white maple leaf flag was born. In addition to the maple leaf's presence on various provincial flags and coats of arms, the country's coinage has featured maple leaves, wreaths, and boughs in various forms for most of Canada's history.

In fact, the maple leaf was present on all Canadian coins from 1876 to 1901. Since that time, it appeared on Canadian pennies until 2012. Third coin using this maple leaf design, second coin in our series of colored maple leaves - this year: green. Last year's coin with red is in stock, as well!

This coin has been struck, and translucent enamel has been added into the struck hollow maple leaf shape at the center. A select addition to any numismatic collection that celebrates not only the robust Canadian spirit but also the exceptional craftsmanship offered by the Royal Canadian Mint. This fine silver coin highlights the beauty and variety of the iconic maple leaf.

Limited worldwide maximum mintage of 7,500! The reverse image features the impression of a colored maple leaf among smaller maple leaves.

Each coin is encapsulated and presented in a Royal Canadian Mint-branded maroon clam-shell protected by a standard beauty box. Are also available for an additional charge. All of the coins offered in this listing are "unsearched". Many coin dealers "search" all coins when they are received from the Mint. They "cherry-pick" the best coins.

Then submit them to be graded, certified, and slabbed by PCGS, NGC, ANACS, etc. When a dealer searches coins, those that they sell in original Mint packaging are only lesser quality coins.

Photos: When a listing offers multiples of the same coin, one coin is picked at random and photographed. Since all coins offered in that listing are essentially identical, the coin photographed is representative of all coins offered. Surface areas that appear black on some proof coin photos are actually highly polished, mirror-bright metal reflecting the color of the camera. We often include proof coin photos with the coin slightly tilted to better depict the mirror bright surfaces. However, tilting the coin may resulting one side being slightly out of focus.

Whenever possible, we use actual photos of our coins, rather than just stock artwork from the Mint. We frequently update and upgrade the photos that appear with our listings, using improved cameras and lenses and better lighting. We will honor your requests for additional photos as quickly as our schedule permits. This item is in the category "Coins & Paper Money\Coins: Canada\Commemorative".